“My favorite thing is to go where I’ve never been.” – Diane Arbus

For a series of articles on Street Photographers, I appear to be working hard to avoid anybody who would have described themselves using this term. However, what is Street Photography if not a tool to look at the world? Diane Arbus focused on those living on the edges of society; dwarfs, those with intellectual disabilities, the LGBT community, nudist and circus performers. Arbus suffered severe bouts of depression throughout her career. She ended her life in 1971, slashing her wrists after taking barbiturates.

Susan Sontag, in her book, “On Photography,” is critical of Arbus, expressing frustration at the lack of compassion for her models, writing that her work ‘shows people who are pathetic, pitiable, as well as repulsive, but it does not arouse any compassionate feelings.’ Further afield she is described as a predator who exploited those she portrayed. However, Arbus spent a great deal of time developing relationships with those she photographed and was also an ‘outsider,’ with her own, very different, issues. As a viewer, the pictures have the power to disturb and, as photographers, to question our motives for what we do.

I feel this is an area that I need to study further. Arbus stands accused of shooting from the viewpoint of the privileged. This accusation relates to a time when photography was (and arguably still is) dominated by White males. The question of exploitation is an issue that resonates, and I question my motives when walking away from shooting in a slum, or an area of poverty. Within out Street Photography community there are other questions to ask. Down and outs and the homeless often feature in Street Photography groups, and there are countless examples of images taken at Holocaust memorial sites and areas of past atrocities. A photograph is the amalgamation of the viewer, subject, and photographer. With a camera in our hands, we are in control of two of these variables.

I believe history is unkind to Arbus; she is not the only individual to have focused on the margins of society. I feel more sympathy for her viewpoint to that of Bruce Gilden, whose work I believe takes wider strides towards exploitation. As for my work, I have started to print the photos of those I have shot, and aim to provide my subjects with copies. Providing people with pictures (particularly of their children) may be one way to avoid the feeling of exploitation, and work towards photography doing greater good for society. 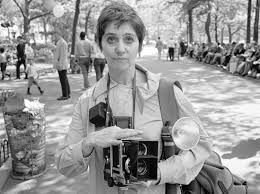 To end on my ‘top tips’ after such a heavy article (it was never meant to be, honest) feels a little lame. Whatever you have taken a photograph of, don’t beat yourself up over it, and if it is a great photo, enjoy it!

Arbus got to know her subjects well, to the point of friendship, so most people would not class her work as street photography at all. However, there is the well-heard phrase, ‘if you want to take better photos, stand in front of more interesting stuff.’ Arbus certainly did that.

If you found this an interesting read then you may enjoy Manilla Slums and Ethics. Ten things to think about…