Antyesti (IAST: Antyeṣṭi, Sanskrit: अन्त्येष्टि) literally means “last sacrifice”, and refers to the funeral rites for the dead in Hinduism. This rite of passage is one of traditional Saṃskāras in the life of a Hindu. It is also referred to as Antima Sanskar, Antya-kriya, Anvarohanyya, or as Vahni Sanskara.

During my last Street Photoshoot, I witnessed an open cremation. This was not planned. During the ceremony I stood far back and watched from a respectful distance. However, I was soon approached and invited to join the people present, and towards the end was asked to take a photo. Weird? It felt it.

This experience happened when I recently re-visited Kalpalli Burial Ground, an area in Bangalore which I started exploring as part of a photo project. At first, I was attracted to how the areas are divided between Hindus, Christians, and Muslims. The press often portray these religions as warring factions, yet in India, the vast majority of people co-exist in harmony. It is this mix of cultures and beliefs that makes India such a special location for photography.

A stone mason carves headstones for the Muslim burial ground.

At both grounds visited there are temples to Kali, a Goddess worshipped as a divine protector, but also of death and war. The grounds are filthy and strewn with rubbish. Untouched food is left scattered as offerings. Live sacrifices are undertaken, the evidence being bloodstained tables on which slaughters are made. Unsurprisingly, it is home to an army of rats, and birds that feast on the carrion left scattered on the ground.

However, the grounds are full of contrast. While Kali is known as a Goddess of War, the burial grounds carry an atmosphere of serenity. People worship, blessings are given and curses removed (or for a small offering, are provided). Families and workers live on the grounds. Between headstones, washing is hung, children play, and meals are cooked. Goats wander freely, standing on graves and waiting for their slaughter. Dogs feed on food left for the dead. 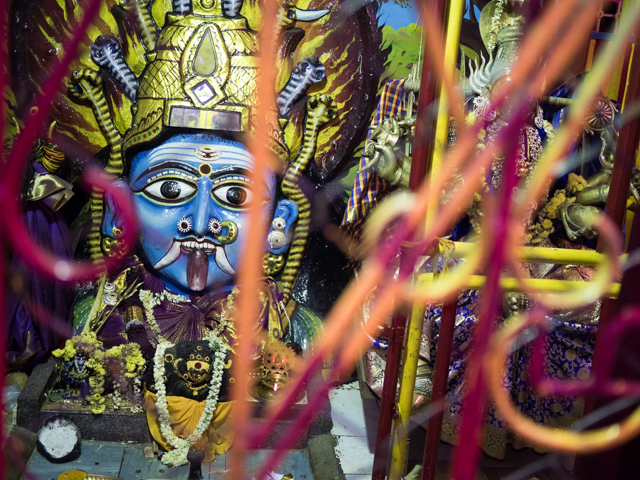 I was in an isolated spot when a passing couple advised me to leave. Having seen discarded needles on the ground, I saw their point and began to make my way out. While exiting, two events occurred. The first was that I witnessed a chicken being sacrificed. It was not a pretty sight, was not done in a sanitary condition and the knife looked as sharp as the point of a wax crayon. I have no idea what happened to the meat, but the headless chicken disappeared in a bag stuffed under a Priestesses armpit.

I grabbed my Sony Rx100 from my hip pocket and went for a photo. The Sony Rx100 has a flash that works wonders in hurried situations, and as ever, balanced the light beautifully; the resulting images quite were gruesome. After capturing some frames, I was asked to stop taking photographs. On this occasion, I had not requested permission to take the picture, and quite frankly am glad I did not. The second situation was different… 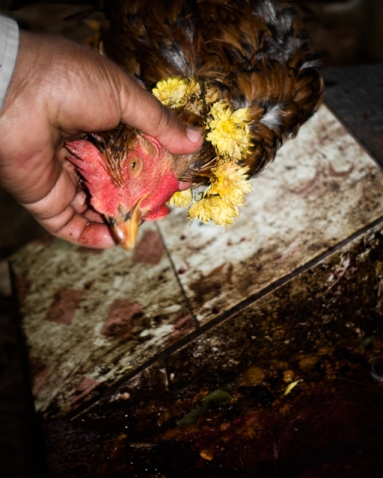 I have seen many funeral services happening in both the burial grounds I have photographed. I keep my distance. Funerals are not a topic for Street Photography. This time there was going to be a cremation. I stood a fair distance back as this was a cultural experience I wanted to witness, but not intrude on. The deceased brother approached me and struck up a conversation, telling me that his sister was only 57 when she died. I was invited to observe the proceedings. My trusty Olympus Em5 Mii rested at my side, turned off and with the lens cap on.

The body was placed on a pile of wood and a last meal of milk fed to the deceased. As the fire was lit more timber was set over the body. It would be a lie to say I had forgotten about my camera, but this was not the time. However, I was asked to take a photo, which I did. People left as the fire took hold, tended by two workers. I captured a few more frames, then departed as the remaining sunlight disappeared.

Note: I am a photographer and a teacher of Maths and Science. I am not an expert on religion, particularly Hinduism. Please get in contact if there are any factual errors i.